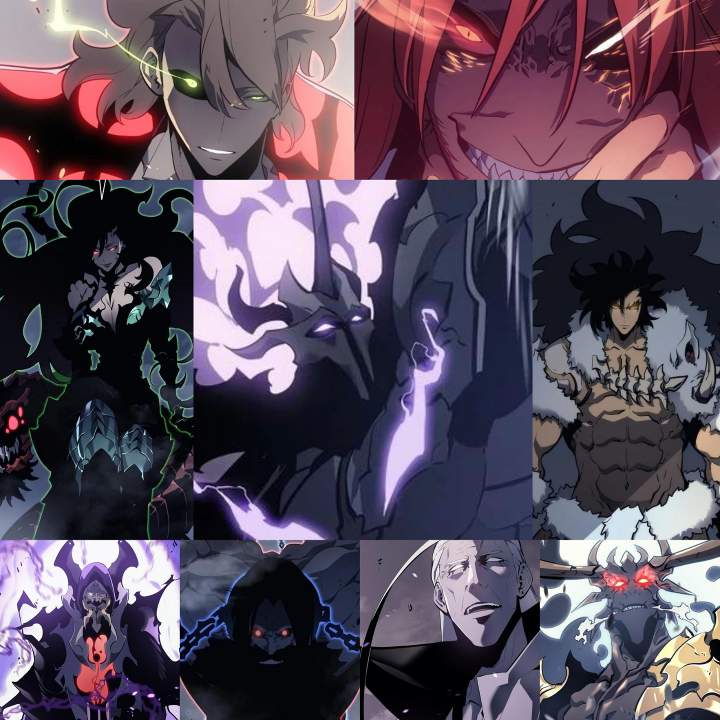 There are countless characters, mostly hunters in Solo Leveling. But, who is the strongest one? I suppose you already have few names.

Well, let’s see how many name can I get in sync with you…

Sung Jin Woo is unarguably the strongest character in Solo Leveling. The way he grew from a unknown E-Class Hunter to the most powerful Hunter ever born is astonishing. Well, that’s what death experience can do to someone…

In fact, Jin Woo was already the strongest hunter in the world, and by the end of the series he became stronger than the Gods…

As you can already see the similarity with Il Hwang’s name, he is Jin Woo’s dad, and also an S-Class Hunter from the begone era. Unfortunately he was trapped in a different realm and everybody thought he was dead…

In terms of strength, Il Hwang was insanely powerful enough for his old age. Guess Jin Woo inherited this prowess from his dad.

The Monarchs are immensely powerful, and have insane command over magical prowess. Not just that, they have years of fighting experience against the strongest and the most brutal enemies.

Of course, not all Monarchs have same prowess, but almost each and every one of them is powerful enough to level a city. Or even a country…

Grand-Marshal is THE strongest Shadow Warrior in Jin Woo’s shadow army. And as the manhua have shown, Bellion is powerful enough to easily counter even a Monarch. Now, of course, he is insanely strong, but way weaker than his master.

Unfortunately, we don’t know how Bellion was created, but his mere presence is enough to speared fear among Humans, even the S-Class ones…

Unlike the Hunters I mentioned above, Liu is from China and supposedly the strongest hand-to-hand fighter ever. His strength is hand-to-hand battle, and fans claim that he is skillful enough to even counter Jin Woo.

Unfortunately, we didn’t see Liu in full-form. I hope the upcoming anime will show at least something about him…

Go Gun-Hee is the “Chad Grandpa” of Solo Leveling. he is humble, calm and composed. Never causes unnecessary tantrums and takes every decisions after minutely observing it. Gun-Hee was the chairman of the Korean Hunter’s Association. This 80-year old S-Class Hunter was powerful enough to counter a Monarch.

I wonder how powerful he was when at his peak performance! What’s you guess?

Thomas Andre is well-built man who terrifies most people with his body, let alone his presence. If I’m not wrong, he is also the strongest hunter in US at present? He is confident at his powers and has also shown this many times during intense battles.

Even Jin Woo respects Thomas’ prowess and his sheer brute-force against opponents and enemies. Here’s a little spoiler: He cornered Jin Woo and forced him to use a special power(Spoiler) to get away of the situation.

Christopher Reed was the strongest American Hunter ever. He technique was based on fire. The fire he created in his final move was so strong that it took more than 1000 fire fighters and at least 14 S-Class Hunters to put it out.

Unfortunately, we could never see him fighting, so we don’t know how skill was he in hand-to-hand fights.

Not gonna lie, Choi is one of the most handsome and neatly dressed Hunter in SL. He carries this “Intense Gentleman” aura around him. He is handsome and doesn’t speak much. But what about his powers?

Choi carries fire magic and has ability to unleash fire on his enemies. Yes, his fire is not as piercing as Reed’s, but is powerful enough to defeat high ranking villains.

Lennart is the strongest Hunter hailing from Germany. He always carries a stoic aura and is highly sensitive to his environment. Why? He is the only Hunter who sensed the overwhelming number of shadows soldiers present in Jin Woo’s shadow

Though he is the strongest S-Class Hunter from Germany, he fell a little short in the final battle. Fortunately, he didn’t die.

the strongest Hunter in Japan. Goto Ryuji’s special ability was not just speed but also extreme prowess. Goto is to Japan what Jin Woo is to Korea. He has great commanding presence and doesn’t mercy on his opponents/enemies.

But he lacked one thing that proved to be lethal: Overconfidence! He was too confident in his powers and speed. He also claimed to be more powerful than Jin Woo…What happened to him in the end if pretty evident for all manhua readers.

Cha Hae In is the only female in this long list of Hunters. Fast speed is her real weapon against her enemies. Not surprisingly, she was also able to beat Beru in a mock fight. And I don’t think she was really serious while fighting him…

Keeping her in the last doesn’t mean she is weak. No, she is insanely powerful, but when compared to all the “beasts” above, she lacks the strength and sheer intensity to counter them.