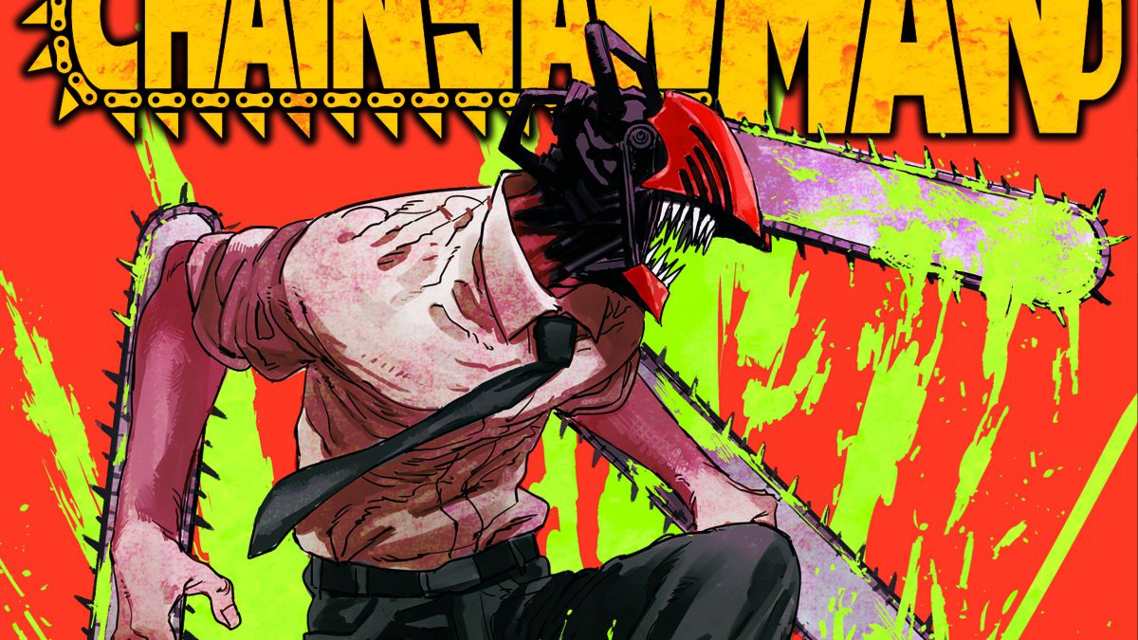 Yuji Itadori and Denji, these two teenagers are lately rocking the stages in manga world. Jujutsu Kaisen as a manga did receive the attention it deserved, but we know what happened after the anime released. And, here we have a different series with a teenager as well waiting to break records in the Anime world.

The anime has been already announced and the hype is real. If you can’t hold your patience and just want to read the manga, then I must inform you about one thing, unlike Jujtusu Kaisen, Chainsaw Man’s story is not, let’s say, straight and simple. It’s far to complex and jumbled-up.

This manga the physical incarnation of every Devil you think of, and on top of that there’s a concept of Hybrids and Fiends. But, what are these? Are they similar to Devils? Are they not Devils altogether? Hence, in this post, I’ll try to explain the basic Differences and Similarities between Devil, Fiends and Hybrids. Let’s Go!

The entire manga is wrapped into this idea. The Devils try to kill Humans, and the Humans, or more precisely Devil Hunters, try to kill Devils and save Humanity. What makes Chainsaw Man’s story quite interesting is the way Devils are shown and the concept behind their appearance.

What are Devils in Chainsaw Man?

Devils are extraterrestrial creatures born by the intense accumulation of Human thoughts towards a particular thing or emotion. Devils reside in Hell until they die and take birth on Earth. 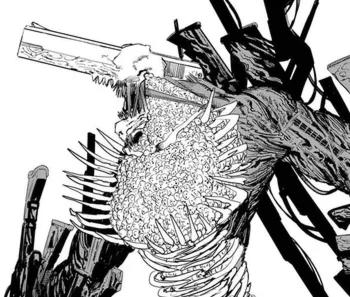 To make it simple, when a person thinks of something, he/she pour energy into that thought. But, to manifest it physically is almost impossible because energy of a single person is too weak.

The scenario, however, changes when a collection of people, let’s say 1000, spend their energy in same thought. Then anything they think has a high chance to become real. Devils are particularly hostile in nature not only among other Devils but especially Humans.

Fortunately enough, we never saw a “Peace Devil” in the manga.

Every Devil has immense physical and other supernatural strength. Unsurprisingly, Devils are intelligent and can take complex decisions while fighting someone or in normal situations.

It’s pretty easy to talk about a Devil’s strength and weakness. Taking for example, the Bomb Devil is powerful against almost every enemy, but is Weak against water. Similarly a Primal Devil(Devils that are considered to be the most powerful) like Darkness Devil must be weak against the Bomb Devil.

Hence, the Strengths and Weaknesses of every Devil depends upon the opponent they are facing, the environment, and other external factors. For now, the only Devil to have no weakness is the Chainsaw Devil. Hence, it’s feared among all, even in Hell.

There are too many Devils in the series to cover all of them. So, I’ll only cover the ones that have played important roles.

There are other Devils too, but those either appeared only for few panels or their impact in the series wasn’t good enough to pay attention to them.

Unlike Devils, Fiends are not hostile towards humans. In fact, there are many Fiends who work for the Devil Hunter Association. They are faithful and easy to control. What makes them unique is how they look.

What is Fiend in Chainsaw Man?

A Fiend is born when a Devil takes over the dead body of a Human. 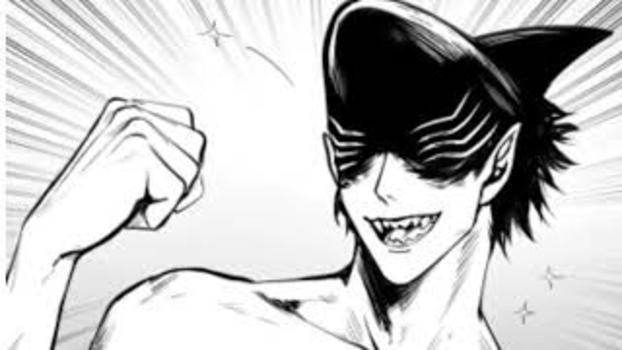 When a Devil takes over the dead body of a Human, there is always a stark difference between the Devil and its respective Fiend. The above image is of the Shark Devil(Beam). As you can see, unlike the Devils who have a unique non-human body, Fiends are a mixture of their respective Devil and the Human the Devil has taken over.

Though these guys do pretty good job as Devil Hunters, they are somewhat fragile and are less intelligent than Devil and also Hybrids.

Although Fiends are far weaker than most Devils, they’re sure quite powerful, and Fiends like Beam have played quite an important role in the manga.

In particular, Fiends have nothing more special than Devils, rather they stay at a disadvantage since they aren’t pure Devils. You can say that the Devil possessing a dead body just took over it since it didn’t want to die and agreed to stay on Earth with diminished strength.

Hence, similar to pure Devils, Fiends also have strengths and weaknesses that are dependent on the scenario they are fighting on. For example: Beam(Shark Fiend) might be a bit weak on foot, but throw it in water and everything in it will “beam” with power.

There are only a handful of Fiends in Chainsaw Man, and almost all of them have played quite important role in the manga.

I intentionally left few Fiends, since from the very beginning till the end we never learned anything about them and also their involvement in the story was non-existent.

It’s a bit surprising to learn that Power is too a Fiend isn’t it? The case with the Gun Devil and Aki is totally different. This isn’t the best place to explain it.

These pack stands in between Devils and Fiends in every aspect, from strength to appearance.

What is Hybrid in Chainsaw Man?

Hybrids have the ability to transform themselves into their respective Devil and return into their Human form whenever they like.

Hybrids are the most uncommon version of Devil in Chainsaw Man as unlike Devils and Fiends, they can not only hide their identity as a Devil and lead Human lives, but they can also access Devil powers and take situation into their hands.

But, becoming a Hybrid comes with responsibility. If the Human severs their contract with its Devil, the repercussion is huge. After the contract is broken, the Human will permanently transform into the Devil effectively killing them in the process.

Hence, this might be the reason why there only a handful of Hybrids in the manga.

Does Himeno Die In Chainsaw Man? Did She Like Aki? MAJOR SPOILERS!!

Hybrids and Devils have almost the same strength and power, since the boundary between is quite thin. Hybrids not only enjoy the brain of a Human, they can also instantly transform into a Devil whenever they like.

In terms of weakness, since Hybrids are, in the end, Devils, they have their own strengths and weaknesses. But, one thing is sure, every Hybrid that appeared in Chainsaw Man was extremely powerful. Powerful enough to even defeat the strongest of Devils.

These are the list of most of the Hybrids in the manga:

These are all the Known and Unknown Hybrids publicly present in the manga. There could be many others we still don’t know. Among all the Hybrids available, Denji’s Devil is the strongest one.

The Unnamed ones appeared in the series for too short period of time, hence their names were never revealed.

This is a TL;DR of the differences between Devils, Fiends and Hybrids:

Can Fiends & Hybrids Return After Death?

Though all of these three are quite similar, there’s one crucial aspect where Devils have a lead ahead of both Hybrids and Fiends. And, it’s about their death and afterlife.

Can Fiends & Hybrid Return After Death?

The shortest answer to this question is No! Only Devils have the ability to return after dying in Human Realm.

After a Devil dies in Human Realm, they take rebirth in Hell. There they live their lives until they die in Hell too, they return back again to Human Realm. This cycle goes on-and-on and there’s no end to it.

You might have a counter-question about whether Devil Hunters who became Fiends or Hybrid will return again like Devils? Unfortunately the answer to this is No too.

To simply this explanation, let’s take the example of a human wearing a cloth. There’s a difference between the cloth they wear and their body, they can take off their cloths but their body will always remain.

Just like that, when Devils take form as Fiends or even Hybrids, they just take over the body of a Human, and with the death of the Human, the Devil gets transferred to Hell and the attachment with the respective Human breaks.

Now, it’s hard to say whether the soul of the Human passes or remains trapped with the Devil for eternity! This was never explained in the manga neither have I read any theory.

We are back to where Luffy and the other Worst Generations are battling against Kaido and Big Mom. And, as expected Kaido and Big Mom are extremely powerful. What’s more welcoming is Kaido’s new beast form. But, the question still remains whether this new form is more powerful? On the other hand, Big Mom has…