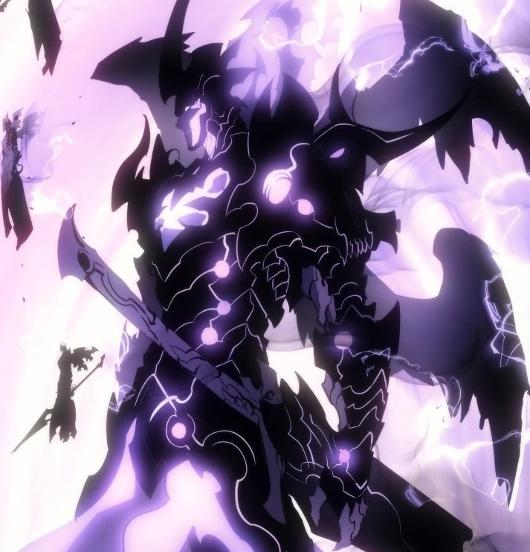 Solo Leveling is not complete without Jin Woo’s “chad” attitude and his Shadow Soldiers…But there are countless soldiers waiting to follow their King, who among the ones are the strongest?

What makes Bellion insanely powerful is not just his skills and experience, but also his sword. It can extend to a great distance and cause some serious harm to his opponent.

Kamish is powerful enough to end humanity alone. At least that’s what the story says about the creature.

Beru was the ant-king when alive, and he still remains one of the strongest Villain Jin Woo fought. After his defeat, Jin Woo extracted him as his strongest soldier. Though Beru hasn’t ever fought Igris, various theories indicate that he is more powerful than him.

There’s also a cute side about Beru that we seldom saw in the Manhua, I hope we can see those moments more in the upcoming Anime…

Igris’ personality is pretty similar to Bellion’s. He has honor and doesn’t speak unless absolutely necessary. Also he treats his master (Jin Woo) as a God. Igris’ art style gives off a “Sparta” vibe…

If I remember correctly, Igris was Jin Woo’s first insanely powerful opponent. He really had to struggle to bring him down.

Greed is the second Human to join Jin Woo’s Shadow Army. He was a former S-Rank Hunter who was too cocky and wanted Jin Woo dead. Instead he got turned into his enemy’s Shadow Soldier.

Having prowess of a former S-Class Hunter, Greed does packs some colossal prowess. Though the Manhua didn’t show him fight that much, but I’m sure he has some serious stopping and attacking power.

Tusk the “Goodest Boy” in the Shadow Army. He is not only terrifyingly strong, but also shy when appreciated for his work! Comparing him with other Hunters, Tusk is easily as strong as an S-Class Hunter.

He has showcased his strength various times in battles. In fact in one battle, he was able to vaporize countless enemies in just a single hit…I don’t want to go near him!

I would say that Kaisel is the unluckiest Shadow Soldier in the army. He is a dragon, is terrifying and also has psychological advantage over enemies. But, Jin only used it for transportation. He never actually used Kaisel for combat and also never bothered to use his powers…Talk about humiliation!

Unfortunately, that’s all we know about Kaisel…Rest assured, Kaisel can fly insanely fast, as expected from a dragon!

Jima is a Naga (snake being) who was insanely powerful when alive. He was easily able to counter Jin Woo’s attacks and also return powerful attacks on him too. But as with most opponents Sung faces, Jima ended up dying in the end.

Jima was later transformed into a Shadow Soldier and went on to fight various big battles for Woo. One special property about Jima is that he can increase in size drastically. Of course, his powers also increases with size.

Very little is known about Tank. Keeping aside his past, if I focus on his sheer prowess, Tank is as strong, if not more stronger, than an A-Rank Hunter. Don’t you want to know why is he called a Tank?

It’s because his physical size is just as same as a Army Tank. Yes, This bear is HUGE and STRONG…

Who Does Jin Woo End-Up With In Solo Leveling? SPOILERS!!

Iron is one unlucky dude! He was an A-Rank Hunter who met the wrong person in the wrong time. Jin Woo. He severely underestimated Woo’s prowess and not only tried to attack him, but also kill him.

Exactly similar to what happened with Greed, Woo killed the A-Rank Hunter and turned him into a Shadow Soldier whom we today know as Iron.

So, this is the list of the Strongest Shadow Soldiers in Sung Jin Woo’s army. No doubt Bellion’s prowess is unfathomable. He defeated Beru withing seconds!

What’s your view on this list? Did I miss someone? Do let me know:

Who Is The Strongest Shadow Soldier in Solo Leveling?