Today I’ll talk about Black Flash and whether Itadori can master the technique. But, what makes Itadori using the technique special?

Just one thing! He is the youngest one to use it and also the only sorcerer to use Black Flash repeatedly without having any issue!

What is Black Flash?

When Cursed Energy is applied within one millionth of a second, a distortion of space is created. That distortion of Space of call Black Flash

Take a real-life example. When you hammer something with extreme force, a spark is created, but, it lasts for only a fraction of a second. The transient spark is Black Flash. The Spark has everything to start a big fire.

In simple words, Black Flash can greatly increase the capability of a physical hit. An average Black Flash has a force of Two and Half times more than a normal hit. 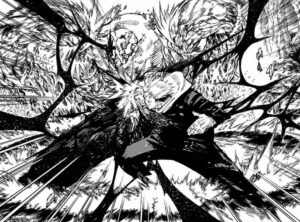 Why it is called Black Flash?

We can not see energy, only the outcome of it. Using Black Flash is not an easy feat, and requires intense concentration. When a Sorcerer is able to manifest a perfect Black Flash, their Cursed Energy flashes Black in Color. Hence, the name Black Flash.

There is no explanation as to why the color is black. Below is a theory that may help:

Comparing Black Flash to Fire, Fire changes its color and the reason behind can be uncountable. But, one aspect of Fire is that, it also changes color with intensity. When something burns normally, color of fire is yellow and looks warm. On the other hand, when it’s intense, it becomes, White.

In case of Black Flash too, since, the Cursed Energy is extremely concentrated at one point, it takes a physical manifestation of the color Black.

Can Itadori Use Black Flash?

Yes, Itadori can use Black Flash and until now, there is no one who can match his level of accuracy and efficiency. Though, we haven’t seen Gojo Sensei using it.

Itadori learned Black Flash during the Goodwill Event Arc when Todo taught him the process. The first who faced Itadori’s Black Flash was Hanami. It’s almost impossible to use Black Flash repeatedly, but while fighting Hanami, Itadori landed multiple hits on him.

Considering Itadori as a beginner Sorcerer, landing consecutive Black Flash on an opponent is a major success.

Can Itadori Use Black Flash At Will?

No one can use Black Flash at Will. Even though the Sorcerer is extremely trained and experienced. The very basic reason behind this is the complexity of using it. Black Flash is formed when Cursed Energy is used in one millionth of a second.

Having such precision is not a small feat to achieve.
Hence, Itadori cannot use Black Flash at Will. If he enters into an intense state, then he can use it repeatedly, though, maintaining such levels of concentration needs considerable driving force.

When a Technique is immensely powerful, there got to be a weakness. In case of Black Flash, it is a hit or a miss technique.

The prime advantage of any Cursed Technique is its Power. Black Flash is a power-packed technique and no one would want to get hit with that. When Itadori landed his first Black Flash on Hanami, it crushed Hanami’s hands. That one hit was enough for Hanami to take Itadori seriously.

And of course the main disadvantage of using Black Flash is the response rate. Black Flash, unlike Domain Expansion, cannot be used according to will. Since, you cannot have the same level of concentration repeatedly.

After Domain Expansion, Black Flash is the toughest technique to manifest. Before using Black Flash, a Sorcerer needs to have intense concentration and an in-depth knowledge about Curse Energy Manipulation.

Think about the situation, your Opponent is trying to kill you, and on top of it Black Flash requires intense concentration. Unless you have mastery of the mind, it becomes a complete mess and the output is only a normal hit and not Black Flash.

Others Who Can Use Black Flash

Other than Itadori, there are other Sorcerers who can use Black Flash.

By looking at the list, your first question would be, “But how can Mahito use Black Flash, he is a Curse?” Well that’s the reason why everyone loves to hate Mahito so much, and, you will learn this eventually.

Aoi Todo taught Itadori to use Black Flash. hence, it’s pretty obvious that he can use it. Though we have never seen him using it.
Nobara Kugisaki was seen using Black Flash with Itadori while encountering a Cure-Human Hybrid.
Mahito landed Black Flash on Itadori when he was mentally broken. After taking the hit, Itadori flew away like a doll. And he didn’t use it once, but more.
Kento Nanami is one of the most efficient user of Black Flash. Only Itadori was able to surpass him. While explaining his experience with Black Flash, he said that he was able to only land four consecutive hits before failing to do more. It is the seriousness of Nanami that helped him reaching this feat.

Other Suspected Users Of Black Flash

Gojo is arguably the most powerful Sorcerer and, a Sorcerer who can use such complex Domain Expansion cannot use Black Flash? That’s not acceptable. Maybe in future chapters of the manga, we will see him using Black Flash, probably when he is extremely angry on someone.

If you don’t know, Okkotsu is a character in Jujutsu Kaisen Universe. But, he made his appearance in the prequel. He was very young, yet, Gojo said that he has the capability to surpass him. Okkotsu’s personality is nowhere similar to Itadori or Nobara. He is most leaned towards Megumi.

If you read the prequel, Okkotsu was the one who defeated Geto when he unleashed his Cursed Technique. Though Okkotsu’s power many not be physically oriented, there is a possibility that Okkotsu can use Black Flash.

And guess what? Okkotsu can also unleash Domain Expansion!

You can stream the latest episodes of Jujutsu Kaisen on Crunchyroll.