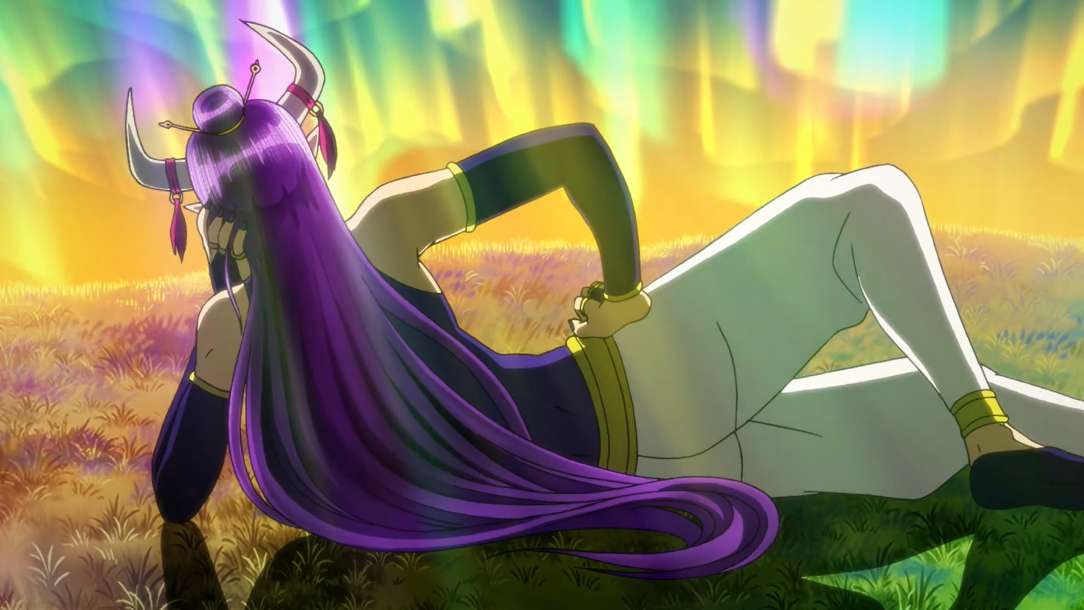 Correct me if I’m wrong, but this is the hottest speculation in the whole series, and also one of the most complex one. When it comes to the Derkila and his connections with the current generation there are more questions than answers.

Hence, in this post I’ll try to explain and make my own guess regarding this whole speculation. Maybe I’ll think over the top, but it’s better to speculate at least something than to do nothing!

In Chapter 38 Henri talks about him previously meeting Human, and then deporting them back to the Human Realm. Now, I read a speculation about the Demon King Derkila being a Human. Accuracy about this claim is everybody’s guess though. But, I am 50% sure about this theory! The reason? Though we have never seen Derkila’s full face, his teeth structure is not like Humans.

He has fangs which is a signature look of all Demons. You can see that in Iruma’s case it’s not the truth! And it is more relevant when the three laugh!

Now, here is what came to my mind. Let’s say that it was discovered that Derkila was a Human, and as for the rules the Demons have to erase their memory and deport them back to where they came from. In anime we have seen how close Sullivan was with Derkila. Hence, the reason Sullivan thought to make Iruma as the Demon King is to make his point clear, that Humans can be better Kings. And also this adds up to why Sullivan never became the Demon King even though he is easily capable of becoming one!

It’s possible that the Human Henri deported was Derkila and the power he got came from the rings he wore. The same ring that Iruma wear now but in just one finger! just a speculation but a possibility!

Why this theory has place in the speculation table is because we have never seen how Iruma’s parents looked like. Heck, it’s still not clear whether those people were really his real parents.

I read a great theory about how Iruma could be Derkila’s son who was abandoned because of some emergency. More like how Yuno and Asta ended up in a Church. From the little bit information we have about how Derkila was, he was bored of being the Demon King. He didn’t like all the pressure he had to go on with.

Hence, maybe he never wanted his son to experience the same. Or there is another theory that says that Derkila fell in love with a Human. And since a contact between a Devil and Human is strictly prohibited Derkila had no option but to leave his son in Human Realm and then vanish.

In One Piece Luffy didn’t know Dragon was his Dad until Garp revealed(accidentally) that he was his Grandfather. Hence, these are just pretty common in manga.

Is Iruma Reincarnation Of The Demon King?

Among all the theories that surround the Demon King’s disappearance, this is also one of them! There are some similarities between Iruma and Derkila. And, some fans also argue siting the reason about why did Sullivan chose Iruma for Demon King Candidate?

The mangaka is quite clever at this point! He knew that readers might try to draw a similarity between Derkila and Iruma. Hence, he intentionally made Iruma look quite similar to Derkila. His more “Humane” personality, his hair, etc. Though he even more cleverly changed the hair color, but the similarities are quite relevant.

Iruma being a reincarnation is too far stretched, and, even if he was a reincarnation, how did Sullivan know about this? I don’t think Sullivan’s insane prowess can allow him to scan billions of children only to find the Demon King’s reincarnation.

Well, there’s a famous quote: “Sky is the Limit.” Hence, the amount of speculation that can come out of this question is endless. Then, what’s the best way? To just wait patiently until the mangaka decides to reveal something!

Who Will Iruma End-Up With? Will It Be Ameri? SPOILERS!!

This theory kicked off when Iruma named his ring’s energy “Alikred.” Soon someone in the fan community figured out that it was the same name only spelled backwards of “Derkila.” Manga readers were just speculating, but what happened in the Anime further confused the community. The VA of Derkila is same as Alikred!

Yes, you can argue that maybe the VA(Voice Actor) of Derkila was intentionally kept similar to Alikred only to further confuse fans. But, among all the theories I’ve read till now, this one seems to be the most relevant one. I have never heard Sullivan talk about it either. Isn’t it suspicious? Also, as Sabnock said, the one wearing a ring like Iruma is destined to become the Demon King in future.

In conclusion, Welcome to Demon School! Iruma Kun is an unique story that balances comedy, action and mystery quite well! If you ask me, then it’s easily one of my favorite manga reads.