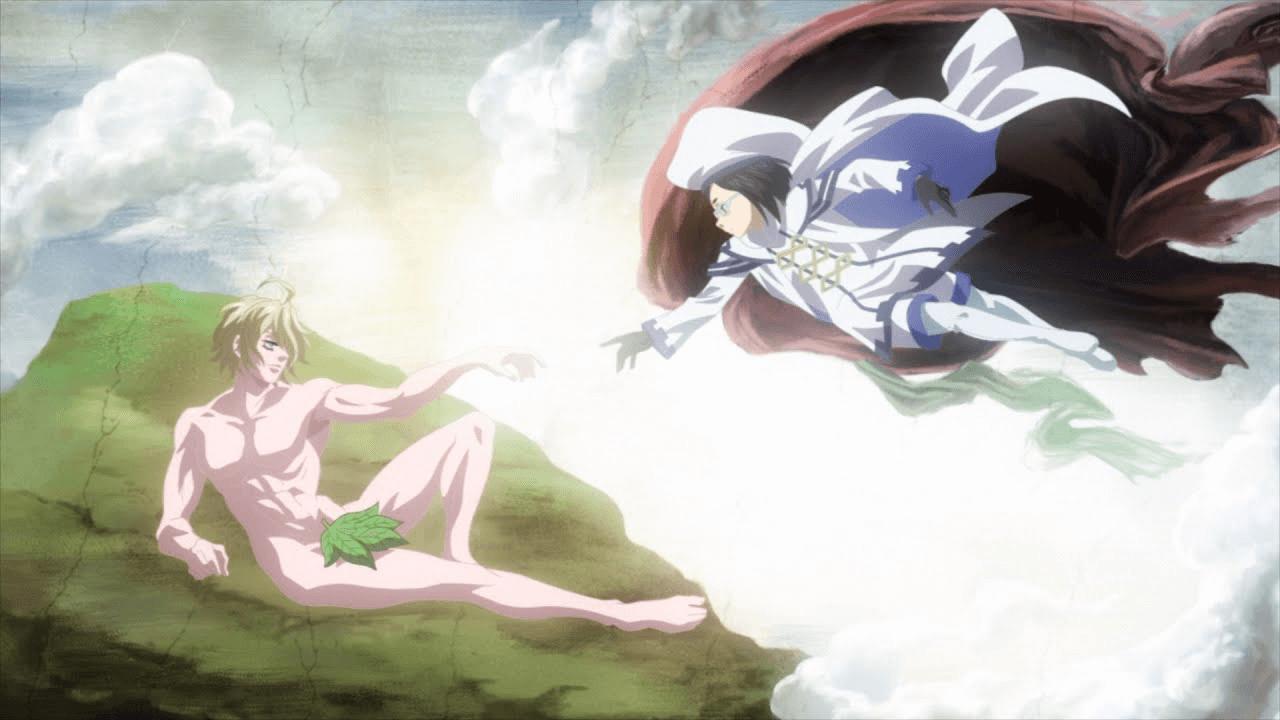 Record of Ragnarok is a manga series that shows the dark side of God-Human relation. And what happens when the Gods decide to wipe out Humans? A War breaks out! And when a War breaks out, the ones with the most power always excels.

Hence, today I’m going to list 13 Strongest character of Record of Ragnarok. This list will not only have Gods, but also Humans…

Here is the list of the 13 strongest characters in Record of Ragnarok. Maybe you have already read/watched the series, but, I think these are the strongest among all. See this list and compare yours. Is there any similarity?

This old man needs no introduction. He is the God of Gods. Zeus is the head and the Supreme in the Greek Pantheon. Hence, this the reason he is also called, “God Father of Cosmos.”
When Brunhilde tried to mock the Gods, it was Zeus who first burst-out and accepted the challenge. Others followed after him.

As Zeus is to the Greeks, Shiva is to the Hindus. Having a skin color like no other, Shiva looks more like an alien than a God. He is better known for his fiery spirit which he unleashes to make the world a right place. Don’t get fooled by his friendly talks, this four-handed God can cause some serious damage.

No, we are not talking about the movie here LOL! He is the one who fixes things with his hammer. Unlike the movie, where Thor’s Hammer is of a normal “human-like” size, this isn’t the case in Record of Ragnarok. His ginormous Hammer is enough to scare anyone to death. Be it Human or even God.

The first Human. From our very childhood, we have known Adam and Eve. How he ate apple, and then Humans developed after. Till now, Adam was only known for his contribution towards Humanity. But, how will he perform in a battle like no other? Well, Adam is one of the strongest. Don’t try to humiliate him by his skinny appearance. What speaks is his fist! Most of life is spent relaxing and recently fighting the Gods.

The dreaded serial killer in the late 1800s, Jack’s real identity was never revealed. But, now, after more than 100 years, we have him. Jack is the epitome of tricks when it comes to pinning his enemy down. He is sort of “John Wick” of the 19th century, killing enemies with anything he can. But, even this serial killer has a humane side which he seldom reveals.

Samurais are always a trend in Japan, even to this date when their existence is almost none. Kojiro Sasaki is one of the most revered Samurai Japan ever had. If his swag wasn’t enough to pin-down his opponent, it’s his sword that does the job. Sasaki was specially chosen to fight for Humanity, and the result speaks for themselves.

Have you ever watched Sumo wrestling? You may not feel excited, but, when Raiden Tameemon steps the stage, the aura changes. Even the one who doesn’t know anything about Sumo will jump with the energy he emits. That’s Raiden for you. The image below shows the “badassery” he carries.

“The Flying General,” that’s what Lü Bu is called. He hails from Ancient China and was one of the most well-known Warlord. When you have an opponent like him, it’s better to back off, because even God cannot help himself when he goes all-out.

The peaceful prince from ancient India. His name is not Buddha, it’s a title given to him after he reached enlightenment. Gautama Siddhartha was a prince when he left everything in search of the ultimate truth. And, after 7 years of intense suffering, he finally found the answer. What makes Buddha unique is that he has experience of being a Human and also a God. What happens when the Peaceful become angry? Hell breaks loose.

The best word to describe him is, “Carefree.” He is the older brother of Zeus, and when it comes to power, he is as fearsome as Zeus himself. But, he is too proud of himself and this pride may result in his defeat. On the side-note, even though he is older than Zeus, the stark difference in their physical appearance is impossible to avoid.

Heracles is one of the most prominent deity of the Greeks and the God of Fortitude. He is quite similar to Buddha who was not a God in the beginning but later. Apart from his strength, what made Heracles a God was his Courage. He became God after drinking Ambrosia(Zeus’ blood).

Zerofuku literally translates into “Zero Fortune,” or “Misfortune.” Now, almost every human would fear this God isn’t it? But, the irony is that Zerofuku is the physical manifestation of the “Seven Lucky Gods.” His signature appearance is a hole in the chest signifying lack of heart.

Seriously, he needs an introduction? Okay. There is very little known about Jesus in the series, but, according to Brunhilde, he is one of the top contenders fighting for Humanity. This is the only image available of Jesus Christ. He appears to be calm and doesn’t react much to his outer atmosphere. Seeing him fight for Humanity would be exciting.

The manga has just begun, and as we move forward, it will get more exciting. When Gods and Humans clash there are consequences, of course.

Does Adam Die in Record of Ragnarok? SPOILERS!!

Talking about other characters, some characters that we haven’t seen are, Tesla, Leonidas, and some more. Heck, we haven’t even seen Jesus yet. Hence, I’ve included him in the least strongest.

I have a feeling that Odin will also fight later in the series. His representation signals bad luck for his opponent.

So, here it is. The most powerful characters in the series. Yes, if you have already watched/read the series you will frown and ask, “But, how is Jesus or other characters the least strongest?”

The thing is, there are many other characters that are still not introduced. Record of Ragnarok is a monthly manga, and hence, things are quite slow. As of now, the manga have covered only a handful of battles, and this list is based on that.

Maybe in the future, we will see this list update, but for now, these are the most powerful characters in the series. .

NOTE: All Images Taken From Fandom.com

Yamato has finally revealed her Beast form, and for now it seems that there is no one other than her who can go toe-to-toe against Kaido. Kaido also reveals her Devil Fruit and according to him it’s extremely valuable. What’s interesting to learn is that Yamato’s technique is able to counter Kaido’s Blast Breath. Recalling…