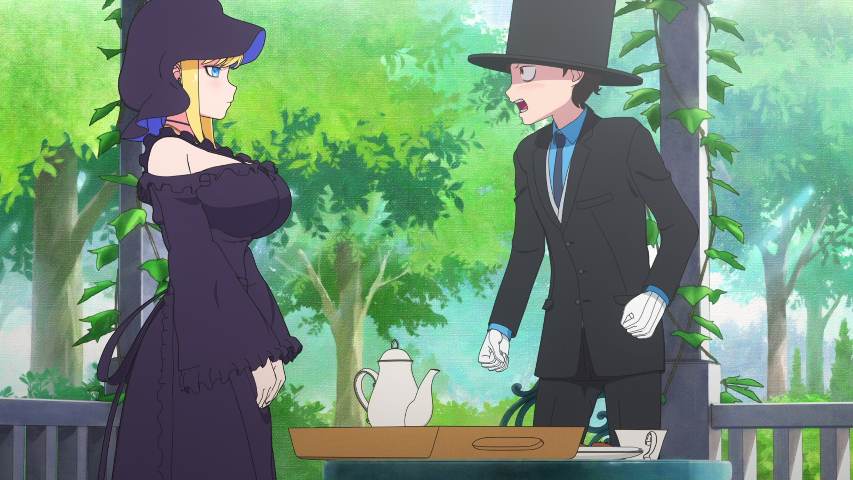 Maids are always overpowered in the Anime and Manga world. But, on the same time they can also be caring as a Mother.

After Bocchan got a curse from an unknown Witch, his life changed. Anything he touches loses life. It’s a curse that can destroy Humanity without too much effort. And, if someone has got an ability to destroy them just with a touch, people are really going to either terrified or filled with hate.

Unfortunately in Bocchan’s case too, the same thing happened. His Mother in a way abandoned him, and left for good. She was busy maintaining her status that she forgot she had a son.

What’s refreshing and cute about moments between Bocchan & Alice is the childish way Bocchan reacts to Alice’s adult jokes. Alice hardly leaves any moment to tease Bocchan, and even though he reacts to them, that’s just the way he loves about Alice.

Winter has come (pun intended) and it’s time for Alice, Bocchan and Rob to play with snow. But, before that happens Bocchan is worried about Alice avoiding any conversation with him. He thinks that the incident last night has irked her. That’s not the case though. She has caught cold.

Most of the time it’s Alice who takes care of Bocchan when he is in need, but now that she has fallen ill, it’s Bocchan’s responsibility to take her care. She is cured pretty quick after that, and then they move on to play with Snow.

Rob goes to work straight-away with making a snowman. On the other hand Alice & Bocchan too are at work. They try to make a snowman as well, but, they end up throwing snowballs at each other.

Not a single ball hits Alice but poor Bocchan gets all of them. They stop after some time since it’s too chilly outside Alice has just gotten better.

Later Alice discovers that she has lost her ear-ring her Mother gave her. Bocchan learns about this and takes the risk to find it. Exhausted too much, he falls on the ground and falls asleep. A new character is then introduced. Caph. She is a Witch with Fire ability who has lost her way.

She melts all snow with her fire magic and finds the ear-ring. Bocchan is interested in her since she is a Witch and may have answer to his questions, but, Alas!

The curse is too high-grade for her to cure. Last part of the episode continues with Caph leaving the mansion suddenly after Bocchan’s comment.

It’s good to see that Bocchan has already got a hint about the Curse. He now knows that the Witch responsible for the Curse is someone who has really intricate knowledge on curses. It’s simply a signal that this series is far from finished and after looking how many chapter the manga has, it’s more evident.

Uniquely Funny Anime To Watch If You Haven’t. Some Are NOT Famous!!

New episodes of The Duke Of Death & His Maid releases every Sunday. Episode 5 will release on 1st August, 6:00 AM(PDT).
The mysterious Witch suddenly left after Bocchan’s comment. Though he didn’t say anything extreme for her to leave, I have a feeling that she will return pretty soon. She is a Witch but is far better than the one who cursed Bocchan.

Watch The Duke of Death & His Maid